On April 14, 2022, the TTC Board approved decommissioning of the SRT in 2023 and converting a portion of the Scarborough RT’s right-of-way into a dedicated busway. This will provide safe and accessible interim bus service until the Scarborough Subway Extension (SSE) is opened by the Province of Ontario in 2030.

The TTC’s Line 3, Scarborough Rapid Transit system (SRT), is a 6.4 kilometre intermediate capacity rapid transit line with six stations that opened in 1985. The TTC’s priority is to provide safe, reliable and accessible service to everyone. The SRT trains have been in service 10 years past their design life, are susceptible to cold weather, and have already been overhauled to ensure safe reliable service.

As an interim solution, beginning in fall 2023, the TTC will deliver express bus service via, the Kennedy and Midland Couplet. Buses will operate southbound via Midland Avenue and northbound via Kennedy Road between Scarborough Centre and Kennedy stations.

To ensure this bus replacement service is safe, reliable, and effective, the TTC is working alongside the City of Toronto to design on-street transit priority measures which will support the frequent bus replacement service. The transit priority measures that are being advanced include: dedicated red-painted bus lanes; transit signal priority; and adjustments to curbs, pavement markings, and turn restrictions. The City and TTC plan to present these priority measures to City Council for approval in early 2023 so that construction and implementation can take place before the closure of Line 3 in Q4 2023. 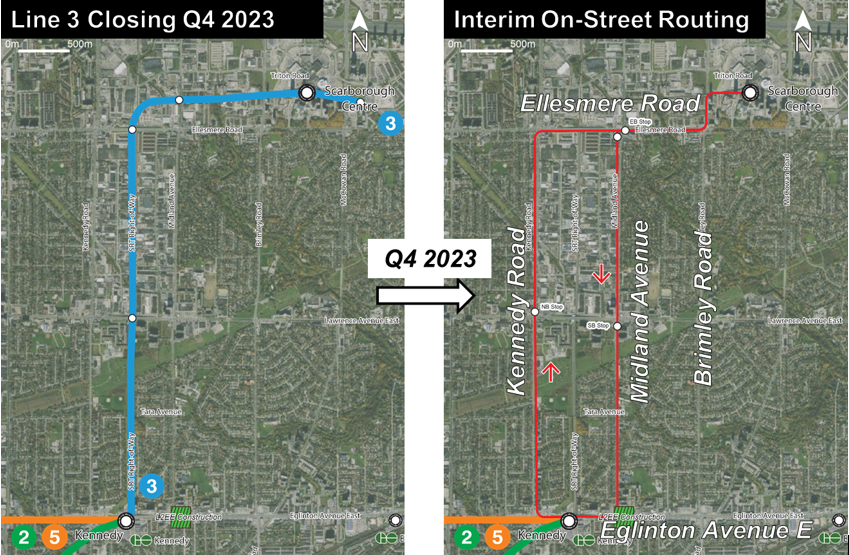 Existing Line 3, alongside the approved interim solution to service customers until the Scarborough Subway Extension is operational in 2030.