Newsletter of the Wheel Trans Community

There was a time when the idea of taking the bus, subway or streetcar gave Wheel-Trans customer, Brenda Joseph pause. Taking those modes even for a portion of her journey presented too many unknown variables. Now, six months later, Brenda’s view has changed. Combining Wheel-Trans service with conventional transit has become a regular part of her life.

“I wasn’t sure I would be able to handle getting on and off the various public transit vehicles, or know where to go once I got to a subway station,” said Brenda, who uses a mobility device. “Even though I was a bit hesitant at first, I eventually gave it a try and haven’t looked back.”

Brenda recently became a customer volunteer with the Family of Services Pilot, which began on May 30, 2017. A Family of Services trip is when a Wheel-Trans customer uses the bus, subway or streetcar for all of, or a part of, their journey. This service model offers customers who can use other forms of public transit more flexible and independent travel choices.

“I like to book Family of Services trips when I have errands to run because I can stop off at different places,” said Brenda. “I rather not wait for a Wheel-Trans ride when I’d have more than one place to go.”

As a customer volunteer, Brenda has agreed to take at least two Family of Services trips a week and provide detailed feedback about each trip.

“Our customers have asked us to make service improvements and provide expanded travel options so they can have the same spontaneity as other public transit riders,” said Eve Wiggins, Head of Wheel-Trans. “This pilot is an important step in that process and will help us to learn from our customers where those improvements are needed.”

Customers who participate in the Pilot receive guaranteed same-day Wheel-Trans service when booking up to four hours before their desired arrival time; reduced phone wait-times when booking trips through the dedicated Family of Services phone line; and detailed information about service-related incidents such as elevator outages, to help guide
their trip.

Customer feedback is gathered through surveys and includes questions about Wheel-Trans pick-ups and drop-offs, customer experience on the bus and subway, service in the stations and much more.

“I am glad to provide feedback that will help improve the system for other riders,” says Brenda. “I will continue to take Family of
Services trips when it fits my schedule.”

Listen to an audio version of New Wheel-Trans mini-bus is here! (MP3, 1 MB)

A pilot version of the new Wheel-Trans mini-buses has arrived at our Lakeshore Garage. Work still has to be done before this vehicle can be put into regular service. This includes inspection and maintenance work, staff and operator training, as well as controlled testing. Another 19 vehicles are expected to arrive before the end of the year.

Thank you to the members of ACAT and Wheel-Trans staff for their feedback which ensured we were able to design a vehicle that will work well for our customers. Thank you also to our staff as we prepare to get this mini-bus on the road. More information about the new vehicle will be included in the next issue of Access. 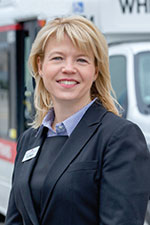 Listen to an audio version of Message from Eve Wiggins, Head of Wheel-Trans (MP3, 5 MB)

Since our last newsletter, we have been busy working on bringing the Wheel-Trans 10-Year Transformation Strategy to life. Now I get to share some good news about our progress!

In late May, we launched the Family of Services Pilot – a key part of the Strategy – to test a new way of delivering service to you. Throughout the Pilot, customers are invited to use a combination of TTC’s Wheel-Trans, subway and bus service, then provide feedback to us about their experience after each trip.

So far, more than 650 Wheel-Trans customers have agreed to participate in the Pilot and as a result, we are able to gather information about our customers’ journeys that we would other-wise not receive. This kind of information helps us to not only improve the system, but also understand the barriers some of you face on conventional transit.

We are still recruiting volunteers and would like to invite those who are interested in providing feedback about their experiences using Wheel-Trans and the bus or subway, to participate. Please email ttcfos@ttc.ca to become a customer volunteer.

I would also like to take this opportunity to remind you that your participation in the Family of Services Pilot and your choice to use TTC’s subway, bus, Community Bus or streetcar, does not exclude you at any time from being able to access Wheel-Trans door-to-door service when you need it.

We understand not everyone can use conventional transit all of the time; and I can assure you that we will continue to do everything we can, individually and collectively, to support you during your journey, regardless of which TTC vehicle you use.

We chose to further our commitment to being customer-centred, we are also making significant changes to the Wheel-Trans Late Cancellation and No-Show Policy. This revised policy which comes into effect on September 7, 2017 aims to give customers more freedom and flexibility, and is one of many steps being taken to improve your experience with us. These changes are closely linked to the Wheel-Trans Customer Experience Strategy that is underway. More information about the new policy is included in this newsletter and you will hear more about the Customer Experience Strategy and new Customer Charter in the upcoming months.

Before the end of this year, we will update our trip booking website (mywheel-trans.ttc.ca). The changes will make it easier for customers to book trips using their mobile phone or tablet.  The updates include a simplified layout and better navigation. I expect that these improvements will be welcomed as we continue to work toward developing a completely new booking website and system as part of the 10-Year Strategy. Stay tuned for more information.

Our work revolves around meeting the needs of our customers, and with that, everything we do today is with an eye to the future. These are exciting times as we transform to better meet customer expectations for service.

TTC's Wheel-Trans customers asked us to make changes to the Late Cancellation and No-Show Policy, so we've created a new policy that better fits with customer travel needs and requests. This new policy comes into effect on September 7, 2017 and is one of many changes to TTC's Wheel-Trans service that demonstrates our commitment to being customer-centred, with less focus on penalty and more emphasis on understanding and flexibility.

Get on board with Community Bus 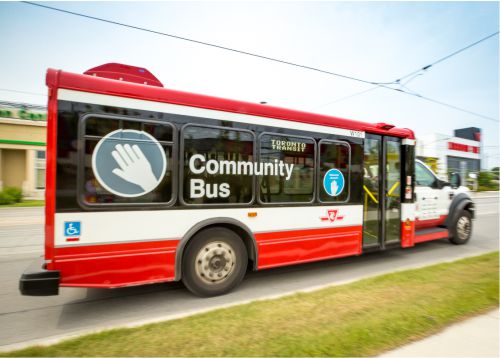 Listen to an audio version of Get on board with Community Bus (MP3, 2 MB)

Starting September 5, 2017 TTC Wheel-Trans will kick-off a nine-month Pilot project along two of its five Community Bus routes – 400 Lawrence Manor and 404 East York. Along these routes, buses will run hourly and stop in front of added destinations. These improvements mean customers will have more accessible and convenient options to get around their neighbourhood.

Not familiar with Community Bus? It is a service that connects customers to a variety of popular destinations along a unique neighbourhood route. It stops at the front-door of various buildings and landmarks, including local shops, grocery stores, community centres, health care facilities and seniors’ residences. While Community Bus uses the same vehicles that Wheel-Trans customers are used to, anyone can ride the bus with a TTC fare.

The Pilot will run until June 2018, when a report on the results will be presented to the TTC’s Board. The route changes will remain in effect until a full assessment of the Pilot is complete and we have decided whether similar changes can be made along other Community Bus routes and/or the number of routes should be increased.

PRESTO rollout continues across the TTC

Listen to an audio version of PRESTO rollout continues across the TTC (MP3, 5 MB)

PRESTO card readers are available on all streetcars, buses, including Wheel-Trans and accessible taxis, as well as at least one entrance of every subway station. The TTC and PRESTO continue to work on a way for you to use your PRESTO card on contracted Sedan taxis. Until a solution is available, you must continue to carry tickets, tokens or cash in case a Sedan taxi arrives to pick you up.

Fare gate installation continues across the subway system. Forty-five stations and 75 entrances have the new paddle-style gates with PRESTO. The remaining entrances will be completed by early 2018.

A number of the TTC’s busiest stations will be under construction in the coming months. Signs will be posted to help you navigate the stations and the PRESTO section on the TTC’s website will be updated regularly.

In June, the TTC began to phase in adult and senior TTC Monthly Passes on the PRESTO card. These passes, which are available at prestocard.ca, cost the same as an adult or senior Metropass and provide the same unlimited travel for a month. The Monthly Pass rollout will continue over the coming months.

For those customers who participate in the annual Metropass Discount Plan, an equivalent will be introduced on the PRESTO card early next year. The new 12-Month Pass, as it will be known, will provide the same benefits as your current MDP pass does. You will continue to receive your MDP pass in the mail until the 12-Month Pass on PRESTO is available. More information about when you need to switch to PRESTO will be provided in a future newsletter.

PRESTO continues to increase the locations where you can buy a card and set a senior concession on a card. Ten Shoppers Drug Mart stores are now selling cards and setting concessions. Additional locations will be added later this year.

We're making great strides to complete the transformation of Woodbine, Coxwell and St. Clair West Stations by the end of 2017. Upgrades to these stations include the installation of elevators, automatic sliding doors, wayfinding signage, wide accessible fare gates and designated Wheel-Trans bus bays. With these changes and the addition of six new subway stations when the Line 1 extension opens in December, the total number of TTC's fully accessible subway stations will grow to 44 out of 75.

Construction to equip Royal York, Dupont and St. Patrick stations with accessible features has also begun, as we continue to remove barriers to using public transit, and provide more independence and spontaneity for our customers.

You're invited to give us ideas on how to make the TTC’s services and facilities better for people with disabilities.

ASL, captioning and attendants available. Refreshments will not be served. TTC Board, TTC Staff, and members of the Advisory Committee on Accessible Transit (ACAT) will be on hand to hear from the public about the accessibility of the TTC, including Wheel-Trans public transit services in Toronto.

If you can’t attend, but would like to contribute your suggestions about TTC conventional and Wheel-Trans services, call 416-393-3030 (TTY at 416-338-0357) daily from 7 a.m. to 10 p.m., except statutory holidays. This event will be live streamed. Visit ttc.ca closer to the event date for more information.

How to get there:

An accessible shuttle bus service will operate from Bathurst Station to the Beanfied Centre starting at 5 p.m. Return buses will start at 9 p.m.

Regularly scheduled accessible streetcar service is also available on the 509 Harbourfront route from Union Station. The Beanfield Centre is 300m from the Strachan Avenue stop. For assistance in planning your trip using the TTC Accessible Transit Network, call TTC Customer Info at 416-393-4636.