In our 5-Year Service Plan & 10-Year Outlook released in December 2019, TTC outlined a proposal to explore priority bus-only lanes and other service-enhancing measures on five of its busiest corridors.

Our partners at The City of Toronto are hosting consultations on the program starting October 18, 2021. Please visit their page for updates.

In our 5-Year Service Plan & 10-Year Outlook released in December 2019, TTC outlined a proposal to explore priority bus-only lanes and other service-enhancing measures on five of its busiest corridors. The five corridors, which had a combined, pre-COVID ridership of approximately 220,000 passengers per weekday, include:

The TTC has worked with partner divisions at the City to develop a prioritization and implementation plan for the five corridors identified in the 5-Year Service Plan & 10-Year Outlook. At the December 2019 and June 2020 Board meetings, motions were approved to include Lawrence East as a priority corridor. The review of Lawrence East is progressing and will be included in the City’s Surface Transit Network Improvement Study that will be presented to Council in Q4 2020.

The recommended prioritization plan is:

Implementation of bus lanes is about moving people more efficiently on transit by improving reliability, speed and capacity on the busiest surface transit routes in the city. This will ensure that resources are being used more efficiently to provide the same level of service or better.

More information on the RapidTO program including the prioritization of the corridors, ridership data, graphics and maps can be found in the Bus Lane Implementation Plan report or the Eglinton East Corridor - Priority Bus Lanes report.

Eglinton East is the first proposed priority corridor based on ridership and ease of implementation. The Eglinton East bus corridor is among TTC’s most heavily used and, even during COVID-19, continues to play a significant role in moving people around the City.

Note, that at this time, bus lanes will only be implemented from Brimley Road to Ellesmere Road. Construction of the Scarborough Subway Extension by Metrolinx is expected to start in spring 2021, which will require lane closures from Kennedy Station to Brimley Road. Once construction is complete, it is anticipated that bus lanes will be extended west to Kennedy Station. During the Scarborough Subway Extension construction works, traffic impacts will be monitored so that the priority bus lanes could be recommended for implementation earlier, if conditions allow.

The stops on the Eglinton East Priority Bus Lanes have been revised to temporarily maintain the Torrance Road, Beachell Street and Cedar Drive stop locations. Ridership at these stops will be monitored and reviewed in the future. 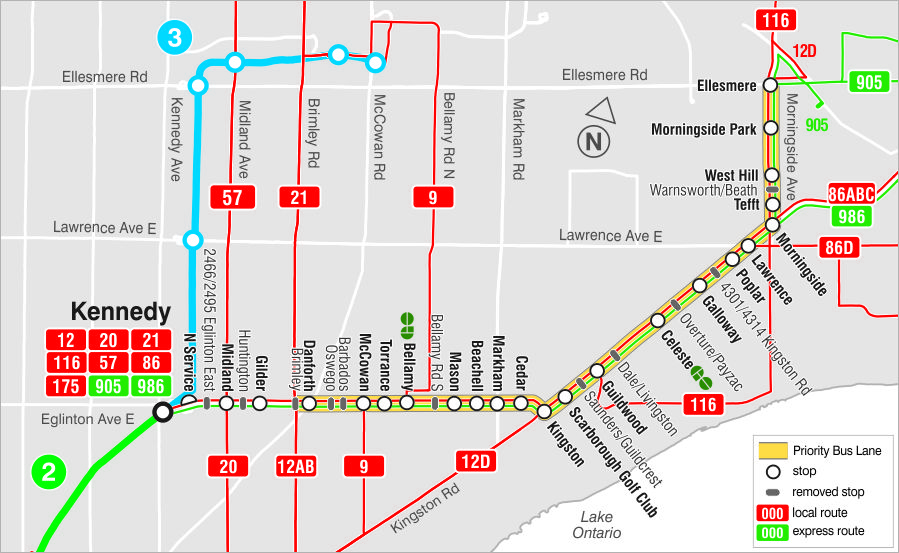 Priority B: Jane Street from Eglinton Avenue to Steeles Avenue

Jane Street is the second proposed priority corridor based on ridership and slow transit speeds. The Jane Street bus corridor is also among TTC’s most heavily used and, even during COVID-19, continues to play a significant role in moving people around the City.

The 10.3-kilometre Jane corridor runs from Steeles Avenue West to Eglinton Avenue West. The project team will seek feedback from the public and stakeholders on the proposed design, please stay tuned for more details.

In addition to the proposed priority bus lane, the City of Toronto is currently undertaking planning studies that impact the Jane and Finch area. More information on this work can be found at Jane-Finch Initiative and Finch West Goods Movement Plan.

We invite you to learn more and share your feedback with us.

The online consultation is now closed. Feedback summaries will be posted here once available.