The TTC is partnering with transit trip planning mobile apps, Rocketmanand Transit to provide real-time bus occupancy information to help customers plan and take their trips. Starting April 16, 2021, you’ll be able to see the volume of passengers on vehicles approaching your stop to help you choose which vehicle you’re most comfortable boarding.

Most TTC buses are equipped with Automatic Passenger Counting (APC), which are electronic devices that use invisible infrared lights at doors to determine how many passengers board or exit buses. This data is now being shared with Rocketman and Transit to inform customers of the passenger volume on the next few buses, indicated by one, two or three icons. Information will be available for the next two or three buses approaching a stop; routes with more frequent bus service will have occupancy information for more vehicles. The TTC uses this same passenger information to deploy extra service where practical to reduce the number of customers on each bus.

Rocketman and Transit will categorize this data as: 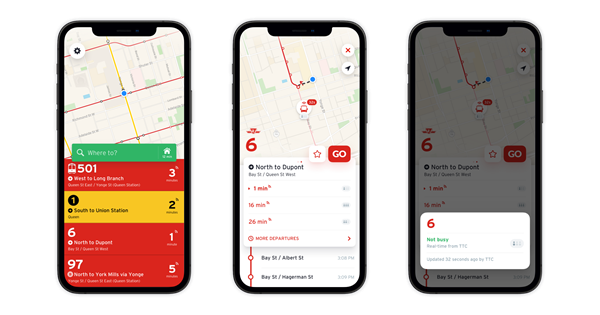 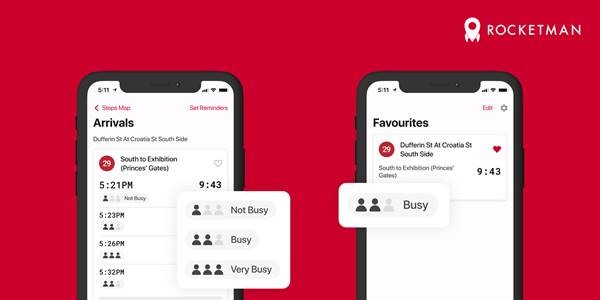 For the time being, the feature is only available for TTC buses. A small number of buses (34 of more than 2,000) currently in service do not have APC installed. If an approaching bus does not have APC, the occupancy level icons for that bus will not appear and only the arrival time will appear on the apps.

The Rocketman and Transit apps are available for iOS at the Apple App Store and for Android devices at the Google Play Store. Once downloaded, the passenger volume information for buses on each route will automatically appear.

The information offered through these apps is intended only as a guideline and relies on data outside the TTC’s control that, while rare, can be delayed getting to the apps potentially causing inaccurate readings. The TTC reminds customers that actual bus loads can change quickly as passengers board and exit vehicles, particularly at busy stops. Customers are advised to continue to use their own discretion and comfort level when deciding to board a vehicle.