Customers travelling on the TTC may notice special photo exhibits being installed in select stations over the next week. The displays, which are being installed in 12 TTC stations, commemorate the transit agency's 100th anniversary. 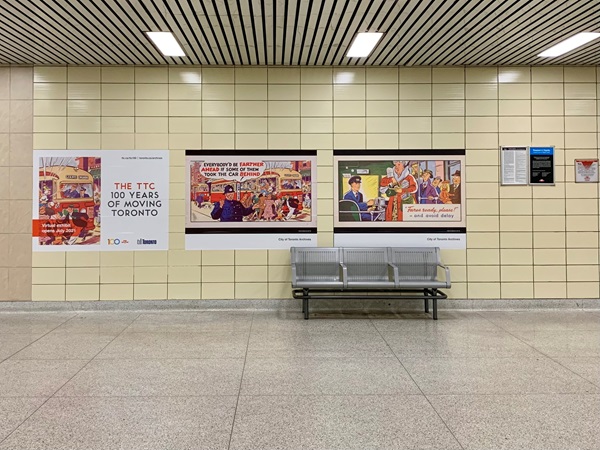 On Sept. 1, 2021, the TTC will celebrate 100 years of moving Toronto. The photo exhibits are the first in a series of events being planned to mark this historic milestone, and are being done in partnership with the City of Toronto Archives.

"This year, we are marking a very exciting milestone in our city with the 100th anniversary of the TTC. For over 100 years the TTC has connected people to all corners of the city and has played a critical role in our growth and success. This new photo exhibit is a great way for residents to experience the history of our transit system and how it has expanded and changed during the past century. While we continue to build up and expand our transit system, this exhibit is an opportunity for us to reflect on the past and our pride in the TTC," said Mayor John Tory.

"These photo exhibits are the first in a series of events leading up to a very important anniversary - 100 years of the TTC. I would encourage Torontonians to take time to peruse the photo displays as they travel through our TTC stations and explore the virtual exhibit on the Toronto Archives website. The TTC has played an important role in our City's history, and these photo exhibits trace the remarkable evolution of Toronto's transit system over the past century," said TTC Chair Jaye Robinson.

Titled The TTC - 100 Years of Moving Toronto, the displays are a comprehensive collection of newly digitized photography showcasing the TTC's journey over the past 100 years. The exhibit will officially launch on July 2, 2021, and will include the in-station displays, as well as a virtual exhibit on the Archives website.

"100 years of keeping Toronto moving is a massive milestone, and I'm very excited about our upcoming anniversary," said TTC CEO Rick Leary. "These exhibits allow us to share the TTC's history and innovations over the past century with our customers. The virtual component allows customers to view the photos without having to be physically present at a TTC station."

Each display will highlight a different era in the TTC's history. The stations and exhibits are:

The stations were chosen as they are high-traffic stations, and serve different areas in the city. All stations selected are accessible. The in-station displays will remain in place until July 2022. More information on the exhibit can be found at ttc.ca/ttc100.

Once it is considered safe to do so, the Archives will also be opening its TTC - 100 Years of Moving Toronto in-person exhibit at 255 Spadina Rd. That exhibit will be open until August 2022.

The TTC will be holding a series of events leading up to its anniversary in September, and throughout 2022. Due to COVID-19 restrictions, events will initially be virtual, or ones that people can participate in while using transit. More information about the events and activities related to this celebration will be shared on ttc.ca and toronto.ca/archives closer to September 2021.