The Toronto & Region Chapter of the Conference of Minority Transportation Officials (COMTO) has collected over 1000 backpacks with school supplies for students heading back to school in September. The backpacks will be distributed to children of all ages, attending Kindergarten to Grade 12 in the Malvern, Rexdale, and Jane and Finch communities. 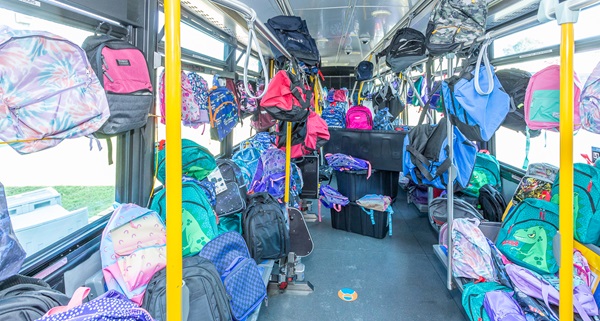 "I'm heartened by the generosity of TTC employees, and proud that we were able to support this initiative," said TTC CEO Rick Leary. "With students heading back to school in a few weeks, these donations will allow COMTO to provide supplies to a number of children in marginalized communities."

"We had set a target of collecting 450 backpacks to be given to elementary and high school students, so we're thrilled that we've been able to exceed this number," said Annette Salfarlie, COMTO Toronto & Region President and Senior Advisor, Diversity and Culture at the TTC. "We are especially grateful for the support from TTC employees, including the TTC Recreation Council, who organized their own fundraisers to purchase supplies for this drive. TTC Revenue Protection and Special Constable Service teams also provided much-needed logistical support."

School supplies collected include pencils, pens, backpacks, geometry sets, calculators and notebooks. The backpacks will be distributed both to community centres and directly to students and families who need them today, Wed., Aug. 25 and tomorrow, Thurs., Aug. 26.

Last year, COMTO Toronto and TTC employees donated 850 backpacks with school supplies to children in need in the Jane and Emmett area. This year, the chapter expanded the backpack and school supply drive to support more communities and ease the back-to-school transition for as many children and families as possible.

COMTO is a non-profit organization that was founded in the United States in 1971, and is the leading national advocate for employment diversity and inclusion in the transportation industry. COMTO Toronto & Region is COMTO's first international chapter and the first chapter outside of the United States. The Toronto chapter was founded by members from the Toronto Transit Commission (TTC) and New Flyer Industries Canada ULC (New Flyer).