The 514 Cherry service is being discontinued as a standalone route with service being replaced by the new King routes. This change is being made to provide more clarity for customers traveling along King St. with all streetcars designated as 504 King, with respective A or B branches indicated.

The change means the two shorter branches of 504 King will service the King Street Pilot area and reduce the need for short turns as a delay on one end of either branch is far less likely to affect service throughout the entire route. Both routes will service King St. between Dufferin and Sumach streets.

Reliability is also improved by changing terminal points. Currently, Dundas West and Broadview stations can only fit one low-floor streetcar at the stations' platforms at a time, while multiple streetcars can be located at the Dufferin Gate and Distillery loops, helping service recover more efficiently.

Both branches of the 504 King will be served by new accessible low-floor streetcars. Temporarily, there will be a need to supplement some rush hour service with older streetcars until the TTC receives additional new streetcars in the coming months. Consistent with the TTC's commitment to our neighbours, older streetcars will not service the Distillery Loop due to noise. 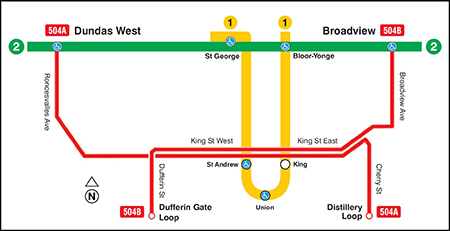