Last August, the TTC Board approved a report, Opportunities to Improve Transit Service in Toronto. Funding for the improvements was approved by the Board as part of the TTC’s 2015 Operating Budget and City Council’s commitment to improved transit in Toronto.

In a report to be presented to the TTC Board at its June 22 meeting, 52 bus and streetcar routes will constitute the TTC’s Ten-Minute-or-Better Service Network. Fifty-two routes will operate every 10 minutes or better to ensure that frequent and reliable service is available across the city, making transit more convenient for all residents of Toronto. (List of the 52 routes and route map below)

“Providing quality transit service that is reliable, punctual, frequent that allows Toronto residents to reasonably opt for the TTC when making their way around the city at all times of the day, is critical to our success as a city,” said TTC Chair Josh Colle. “Earlier this year, Mayor Tory and City Council made an unprecedented commitment of almost $100 million to the TTC in the form of frontline services for the people of Toronto. As Chair, I am pleased to see us continue to make headway on improving public transit in Toronto.”

The improvements include all four subway lines, 11 streetcar routes and 37 bus routes and will be implemented through the end of 2015 and into 2016. 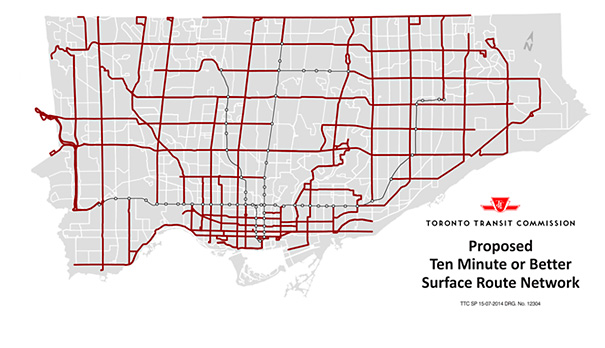