Black History Month is an opportunity to reflect on and celebrate Black Canadians and their many contributions and accomplishments. This year, we partnered with the City of Toronto’s StreetARToronto (StART) Program to showcase 16 unique art pieces and share stories of eight local Black artists and artists of African descent. Black History Month also provided an opportunity for the TTC to reflect on the work we’re doing to build a more inclusive and equitable organization for our customers and employees. 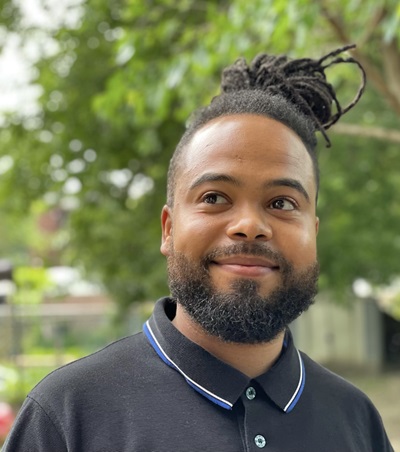 Toronto artist Leyland Adams is a creative person of colour who has always pushed boundaries, including the boundaries of accessible art. Working with the CNIB, Adams is making murals accessible for people with visual impairment, while beautifying his community. His work features high-contrast imagery, audio descriptions, and – in the case of Toronto Island Sunset (2020, commissioned by StreetARToronto) – textured imagery and QR codes with audio descriptions. Adams is a community-based public artist who partnered with the Downtown Yonge Business Improvement Area to stage a public exhibit of street and graffiti artists’ work in 2019. Leyland has travelled the country and across the globe to places like London and India to bring his special brand of public art to the world. In addition to private commissions, the Sheridan College Fine Arts graduate works as a facilitator and project coordinator for StreetARToronto on projects that enliven and beautify the city. 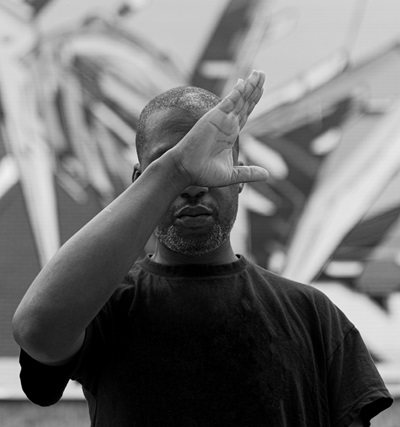 Evond Blake is a Canadian multidisciplinary visual artist who has worked under the pseudonym MEDIAH for over 25 years.

An internationally renowned visual artist, MEDIAH is a trendsetter sparking new ideas and originality by blurring the lines between post-graffiti and dynamic abstraction.

MEDIAH's work consists of weaving traditional street art forms with traditional painterly techniques and mixed media printmaking using many forms and approaches found in digital art and design. Heavily inspired by avionics, mechanical engineering and schematics, the artwork glorifies and captures the essence of speed, motion, dynamism and force to create movement on the image surface.

MEDIAH's work provides the viewer with not only this glorification of speed relating to the thirst for a faster and more streamlined world but also its unavoidable repercussions of collision, disaster and chaos.

MEDIAH is part of CBS – Can’t Be Stopped, one of the most prolific and respected international graffiti labels based out of Los Angeles. 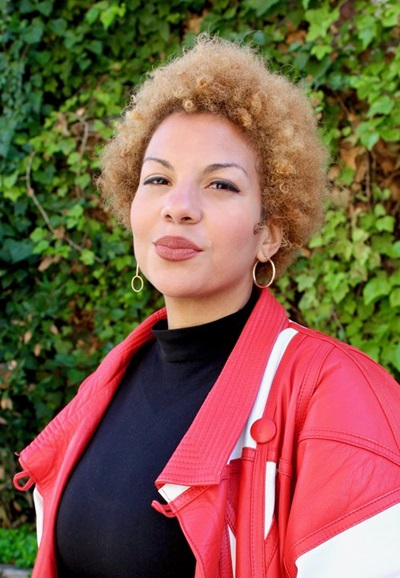 Her work stands at the intersection of art and wellness, centering colour as the universal language of emotions. Colour psychology has proven beneficial to the human body, psyche and overall well-being.

Through a range of artistic mediums, including large scale public murals and digital installations, she explores colour psychology and scale to create vibrant, chromatic public art experiences with a holistic approach.

With mental health issues on the rise across the globe, especially since COVID-19, Comrie’s works seek to reimagine public art, creating accessible spaces of colour therapy for everyone.

Elicser Elliott is a Toronto based aerosol artist whose creations adorn the cultural landscape here and abroad. As an integral part of downtown Toronto’s street art community for over two decades, he has been recognized for his artistry and praised by both street and fine art collectors all over the world. His work has been featured in a multitude of publications, hung in prestigious galleries like the Art Gallery of Ontario, and for a number of years he had his own installation in the Royal Ontario Museum.

Although he is a Montreal native, Elicser grew up on the West Indian island of St. Vincent, where he was first made aware of his artistic abilities. His father was the creative genius behind the country’s annual festival, and he followed alongside him while he created the costumes for the event, trying to recreate the designs to the best of his ability. Eventually his family returned to Canada, where he was introduced to the world of street art while attending the Etobicoke School of the Arts. However, suffering from the influence of what he describes as the “West Indian mindset” he had not seriously considered art as a possible occupation until he had a discussion with a guidance counsellor who encouraged him to study animation at Sheridan College. 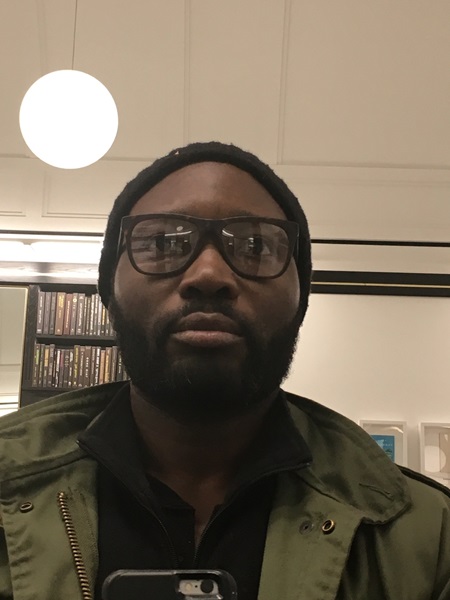 At the tender age of nine, Toronto-based illustrator Adrian Hayles discovered the expressive nature of the visual arts. With his continued artistic development, illustration became his deepest passion and talent. His desire to learn and absorb from his surroundings led him on a personal creative journey. As a graduate of the Graphic Design Program at Humber College with over 10 years of working experience behind him, Adrian has established his place in Toronto’s modern art community. His style is provocative and inspiring and defies categorization. Blurring the lines between graffiti and ultra-realism, Adrian’s voice and vision is instantly identifiable. His works include countless portraits and illustrations for various magazines and collaborations with the City of Toronto to develop murals for vacant community spaces. In the past Adrian has painted complete buildings and city blocks, designed award winning video games and animated television shows. He has also successfully developed and filed a functioning patent for the Stud Horse Foldable Drawing Bench, and is the Principal and Founder of Behind the Front Visual Arts Studio. 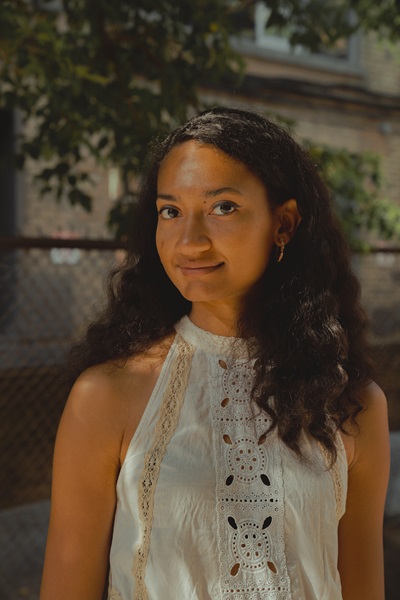 Leone McComas is a Visual Artist, Muralist, and Designer based in Toronto. Inspired by her faith, she creates murals to uplift communities with a focus on hope and transformation; as such, her art features a heightened sense of movement and luminosity. Leone’s public projects include works for StART Toronto, WomxnPaint, STEPS ‘I HeART Main Street’, Canderel ‘St. Clair Village’ with MRL™, and Canada Ireland Foundation ‘Miotas/Myth’. Since receiving her Bachelor of Design from OCAD University Leone has exhibited in solo exhibitions and art fairs across Toronto, as well as internationally in Italy and South Korea. She is a recipient of the OIEOS 2010 Scholarship, OAC 2018 Visual Arts Project Grant, Mural Route’s MACD, and the AKIN x MOCA residency 2018-19. 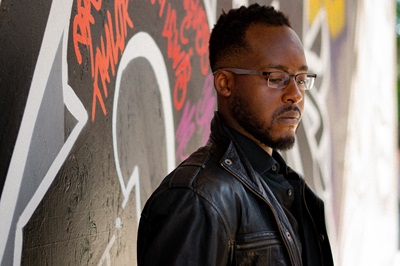 Jessey ‘Phade’ Pacho is a renowned graffiti artist honoured by the Canadian government and Armed Forces for his exceptional work. Jessey has dedicated his life to mural making, aerosol art, traditional graffiti, and shaking graffiti-related misconceptions.

Since overcoming homelessness through his craft, Jessey has positioned himself as a leader in his industry. For over ten years, he has managed multiple professional artists' teams and delivered high-impact programming across Canada. He has been internationally recognized and published nationally, most recently for #paintthecityblack. Jessey also co-founded the event #everyonevsracism at Dundas Square and, during the pandemic, started his own mural production company, Phade Creative Inc.

Jessey's work builds community and breathes new life into spaces that could use a boost of both color and commerce. Pursuing greater heights in his craft, Jessey remains a student to time and a humble servant of the arts. 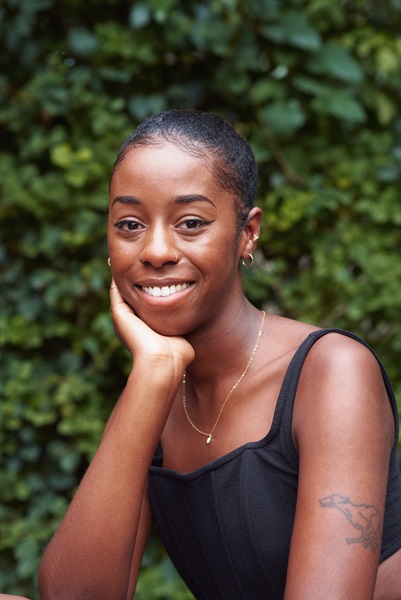 Curtia Wright is a multi-disciplinary fine artist, mural artist and arts educator based in Toronto, Ontario. She received her Bachelor of Fine Arts at OCAD University in the Drawing and Painting Program in 2015. Her artwork re-imagines our reality using elements of fantasy and surrealism. Using bold and vibrant colour, she aims to transport audiences to her alternate worlds. Colour functions as a powerful element to create a sense of bliss within the viewer. Wright's murals commonly depict abstract figures surrounded by floral patterned elements. Her narratives focus on telling stories of Black peoples of the African diaspora, primarily speaking about her own heritage and history as a Jamaican-Canadian. She's collaborated on mural projects with community organizations and private mural commissions across the Toronto and the GTA