Restoration of service on bus, streetcar, and subway routes continues throughout the rest of the year. Service increases will be addressed on a route-by-route basis and may vary according to ridership levels.

Service will be adjusted on the following routes:

The following construction projects will begin and will impact service in these areas:

The following construction projects will continue and impact service in these areas:

Service will be increased on Line 2 Bloor-Danforth all days of the week as follows. Note: time periods with no change are not shown. 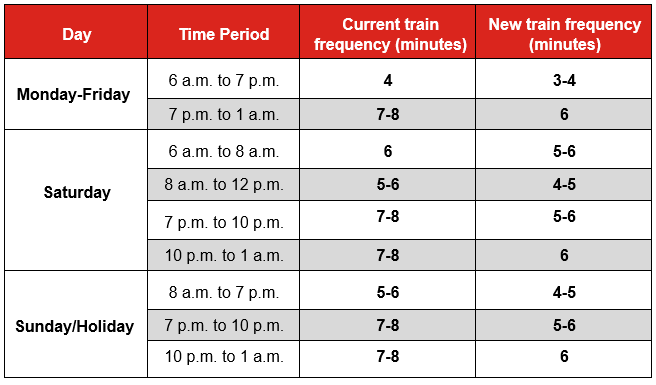 Service will be increased during the following periods. Buses will continue to arrive every 10 minutes or sooner.

All 504 King streetcar service will operate on the 504B (Broadview Stn-Dufferin Gate) branch, due to track work at the King Street East and Sumach Street intersection. Streetcars will divert around the closed intersection via Queen Street East and Parliament Street.

Service on the 504A (Distillery-Dufferin Gate) branch along Cherry Street and Sumach Street will be replaced with buses, connecting to streetcars at Parliament Street and King Street East.

304 King overnight service will continue to operate with buses, diverting around the closed intersection via Queen Street East and Parliament Street.

506 Carlton streetcars will divert via Bay Street, Dundas Street, and Parliament Street, due to track work at the Carlton Street and Church Street intersection. Transfers to Line 1 Yonge-University can be made at Dundas Station.

306 Carlton overnight service will continue to operate with buses, diverting around the closed intersection via Yonge Street, Wellesley Street East, and Jarvis Street.