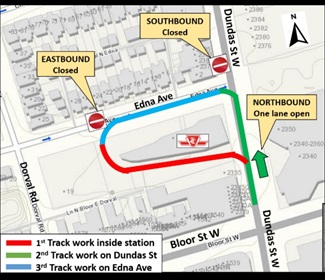 For each work location below, road closures/restrictions will be up to 30 days starting Monday, May 9.

Street parking may be temporarily restricted on Dundas Street, north of Edna Avenue in the vicinity of rail panel storage areas.

During work on Edna Avenue

During work on Dundas Street West, north of Bloor Street:

During work on Dundas Street West, south of Bloor Street:

Note: As part of track renewal projects, equipment and materials are stored close to the site. Rail panels will be delivered to the site on flatbeds. Some flatbeds will be temporary stored on Dundas Street West and on Edna Avenue for a short period of time prior to being installed.

Thank you for your patience as we work to improve transit infrastructure in Toronto.

For further information on the project