TTC history is inseparable from the history of Toronto. Get the historic details on the TTC, how it was built and how it has grown since 1861.

The following passages are taken from Mike Filey's book titled The TTC Story: The First Seventy-five Years. The book, published by Dundurn Press in 1996, features over one hundred black and white images selected to illustrate the main transit event in each year of the TTC's existence. 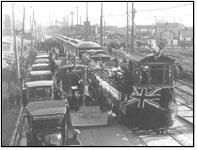 In an effort to provide better public transit throughout the city and into the outlying suburban communities, the newly established TTC undertook to integrate the various street railway services then in operation. One, the Toronto Civic Railways, was municipally operated while other routes were run by private entrepreneurs. An example of the latter was the Toronto Suburban Railway (TSR) with routes within the city's boundaries in the northwest part of Toronto. Two of their routes traversed borders with track extensions terminating as far afield as Woodbridge and Guelph.

In 1925, the TTC, acceding to a request from the Township of York, took over and operated under contract that portion of the TSR's Weston line from its southern terminus at Keele and Dundas streets via Keele Street and Weston Road through the community at Mount Dennis to the north end of the Town of Weston. In total, the TTC operated four lines for the Township of York Railways (namely, Rogers, Oakwood, Weston, and the short-lived Lambton). The newspapers of the day referred to the new TTC/York Township partnership as providing the "emancipation [of the citizens] from the Suburban regime." Vehicles participating in the official opening ceremonies of the new Weston route are seen northbound on Weston Road, November 28, 1925. Note the Bell Telephone Company "promo" on one of the parade floats. 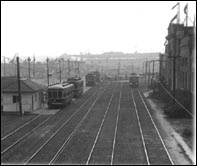 Visitors to Toronto's annual Canadian National Exhibition have relied on public transportation to and from the grounds almost since the fair's inception in 1879. It was during the 1881 edition of what was then called the Toronto Industrial Exhibition that the horsedrawn cars of the Toronto Street Railway on the King line were routed down Strachan Avenue to Wellington Street. From there it was just a short walk to the hustle and bustle of the Exhibition grounds. The King cars were electrified on September 5, 1892, and during that year's fair were routed down Dufferin Street to loop at Springhurst Avenue opposite the old west entrance to the grounds. It wasn't until after the city acquired forty acres of property west of Dufferin Street in 1906 that the present layout of the west end of the grounds began to take shape.

In an effort to entice visitors to the less-populated, east end of the grounds a new streetcar loop was built just west of Strachan Avenue in time for the 1916 edition of the fair. An attempt to run a service to that part of the grounds was first proposed as early as 1905. To get the Bathurst cars to this proposed loop it would have been necessary to lay track right through the middle of Fort York. Members of the Ontario Historical Society and the Old Fort Protective Association fought the idea, warning that the ill-conceived plan would destroy the historic site. In addition it was claimed that such treatment of the property was in fact prohibited by an agreement signed by the city and the Dominion government, an agreement that gave Toronto jurisdiction over the Garrison Common (property that included the Fort and the land acquired for the easterly expansion of the CNE grounds) in exchange for the city's promise to restore and maintain the Fort. It was the government's contention that the running of streetcars through the Fort would not be an acceptable use of the historic property. The eagerly sought after streetcar service to the east end of the CNE didn't materialize until August 25, 1916. On that day streetcars began operating across the former Humber River railway bridge (that had been disassembled and re-erected at a northeast/southwest angle at the foot of Bathurst Street), then westerly over new track that skirted the Fort to the north and on to the CNE Eastern Entrance. That bridge was realigned in a north/south direction in 1931 and is still used by streetcars CNE-bound on the Bathurst route.

In this photograph a Witt streetcar loads homeward-bound visitors to the 1933 edition of the CNE at the eastern entrance loop. This loop closed June 17, 1995, to permit construction of the new National Trade Centre. In June 1996 streetcars will once again enter the grounds, this time via Manitoba Road on the north side of the grounds and will loop near the GO Transit station. Interestingly, this track alignment was first proposed more than sixty years ago and accounts for the Coliseum's impressive-looking "back door."

As the seemingly endless war continued to rage on both the European and Pacific fronts, increasing numbers of Allied victories gave some hope that the end of hostilities might soon be in sight. But as consumed as the world was with the war, plans still had to be made for the post-war years. Here in Toronto one thing was absolutely sure; steps had to be taken immediately to ensure that the city wouldn't choke in its own traffic chaos. As seen in this photograph taken less than four months before VE Day, cars, trucks, and horse-drawn carts clog the city's downtown core. But even as Torontonians continued to pray for an end to the war (and some, possibly, an end to the traffic congestion), TTC officials were already working on plans to construct the nation's first subway system, having created the Rapid Transit Department (with W.H. "Pat" Paterson as Office Engineer) on January 1, 1944. Obviously no physical work could be done until all hostilities had ceased.

By the fall of 1945 the world was at peace again. Nevertheless, actual subway construction didn't start for another four years. Before long, another major world conflict erupted and once again Toronto's rapid transit project faced major delays.

Historically, the first newspaper reference to the construction of a subway (actually the term then in use was underground railway) in Toronto appeared in the April 29, 1909 edition of The Evening Telegram. The article referred to a meeting held between City Engineer Rust and the Kearney High-Speed Railway Company of London, England. The company had offered to build and operate two "underground lines" at a cost of $1 million per mile. The route of the first was highly prophetic - under Yonge Street from the Town of North Toronto (Eglinton Avenue) to the Custom House at the corner of Yonge and Front streets. The second was much more ambitious; From East Toronto via Queen, Dufferin, and Dundas streets to West Toronto. The plan (and English promoters) vanished when Engineer Rust reported that should a franchise be awarded by the city it would not extend past the year 1921, the termination date of the Toronto Railway Company's mandate and the year the municipality planned to assume all public transportation responsibilities. Citizens would have to wait another forty-five years to ride Toronto's new "underground railway." 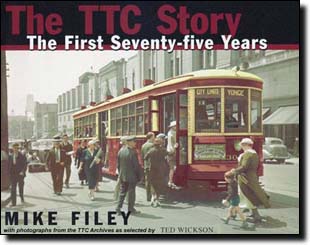 Mike Filey is the author of more than a dozen books about Toronto's history including:

Mike is the author of the popular Toronto Sunday Sun column titled "The Way We Were" and is a recipient of the City of Toronto's Civic Award of Merit.

Published with the permission of the author.

This is copyrighted material and should not be reproduced without permission.